According to Streetsblog LA, which covered the event in detail, when the $1.5 million project is completed in May 2018, Alhambra Avenue will feature:

A small group of NELA advocates biked to the groundbreaking from York Park in Highland Park. Here’s to more group rides to more bike and pedestrian safety groundbreaking projects across the City! 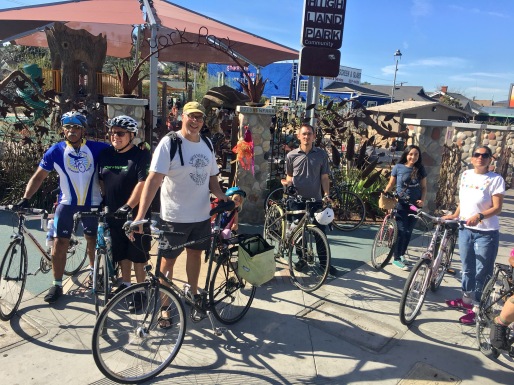 Bike advocates met at York Park in Highland Park to ride over to Alhambra Avenue safety improvement groundbreaking in El Sereno. York Park was formerly a gas station, and thanks to Councilmember Huizar’s support, the site was purchased, cleaned up, and converted to a neighborhood pocket park.

bit further east and south of El Sereno in the San Gabriel Valley, the City of Monterey Park voted to approve proposed protected bike lanes along Monterey Pass Road, the first bike lanes of any type for the City. BikeSGV deserves a lot of credit for advocating for this project.

The Eagle Rock Association (TERA) in collaboration with councilmember Jose Huizar’s office will hold a kick-off meeting for a new complete streets initiative for Eagle Rock Boulevard on January 30. The initiative, called “Rock the Boulevard,” will ultimately culminate in a long-range vision plan for a safer and more sustainable boulevard. Please come join in the community process and bring your ideas for how to improve the public realm on Eagle Rock Boulevard.

Metro’s initial proposal for the Union Station Forecourt and Esplanade Improvement project. This design has since been improved. Image via: The Source

On January 16, Metro’s outreach website The Source announced the Final Environmental Impact Report for the Union Station Forecourt and Esplanade Improvement project had been released. For those unfamiliar, the project consists of widening the sidewalk in front of Union Station on Alameda Street and closing a section of Los Angeles Street to automobile traffic to expand a pedestrian plaza. As proposed, the project was a major improvement for pedestrians. However, according to public comments on the project, NELA bike advocate Michael MacDonald felt the project did not go far enough in improving conditions for bicycling. He provided a counter-proposal (see page 92) to Metro’s proposed painted bike lane. Below is MacDonald’s revision with a two-way protected bike path and Metro’s revised proposal. 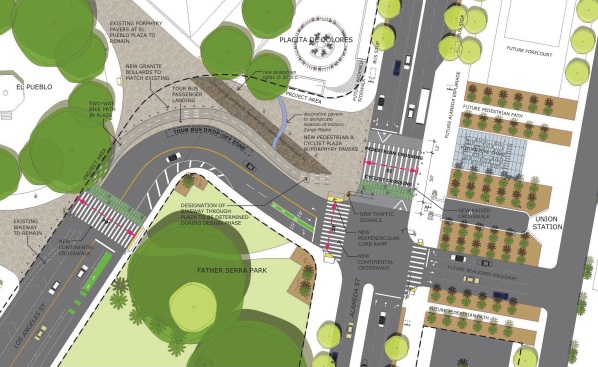 Metro’s official response reveals they changed their recommended proposal to more closely resemble MacDonald’s suggestion to upgrade bike lanes to a protected bike path. While Metro’s new proposal stops short of MacDonald’s proposal which would extend the bike path further down Los Angeles Street, it appears the protected bike path could be extended if Metro collaborates with the Los Angeles Department of Transportation (LADOT) and Council District 14.

Rendering of the Taylor Yard Bike Bridge. Image via: Bureau of Engineering

When accessing the LA River bike path from Northeast LA, there are two choices for accessing the path– North Figueroa Street and Fletcher Drive. Neither street is very pleasant for bicycling, which makes the LA River feel like a resource that is so close yet so far away. Thankfully, a new bicycle and pedestrian friendly gateway connecting the LA River to NELA may emerge soon. LA Curbed reports that the long anticipated Taylor Yard Bike Bridge could begin construction this summer.

The Taylor Yard Bike Bridge appears it will be well-lit when it’s dark outside. Image via: Bureau of Engineering

Once completed, the Bridge will provide a car-free connection to the LA River, and the bridge itself will be accessible via Cypress Avenue, which features bike lanes and less traffic than Figueroa and Fletcher. As noted by StreetsblogLA, the Taylor Yard bike bridge is also just one of three car-free bridges proposed to be built across the LA River along the soft-bottom Glendale Narrows portion of the waterway. With these new bridges in place, the most difficult part of accessing the LA River bike path (the crossing of the river itself) will be completed. Hopefully we will see comfortable surface street bicycle routes develop alongside these new bridges to fully capitalize on these multi-million dollar investments. 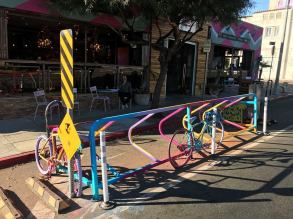 A colorful new bike corral at Spitz in Los Feliz. Via: Spitz

In a City often referred to as the car capital of the world, converting any inch of road space from cars to bikes is a big deal. On the trendy commercial street Hillhurst Avenue in Los Feliz, the city recently installed a bike corral, converting one car parking space to a dozen bike parking spaces. The restaurant in front of the bike corral, Spitz, celebrated the bike parking with an extended happy hour.

On social media, councilmember Mitch O’Farrell shared that he worked to get a new traffic signal to help pedestrians get across Silver Lake Boulevard in Silver Lake, and a new bus shelter on Eagle Rock Boulevard in Glassell Park.  Over on Citywatch, a press-release from Councilmember O’Farrell was shared in which he highlights recent pedestrians throughout his sprawling district (most of which is not in Northeast LA). Of the noted improvements, most consist of new traffic signals and crosswalks. Councilmember O’Farrell’s press-release notes:

During my first term in office we dedicated more than a dozen pedestrian safety improvements, and I look forward to welcoming more in the years ahead.

A refreshing and encouraging sentiment to hear from a councilmember. Let’s hope O’Farrell can aspire to dedicate at least twice as many pedestrian improvements in his second term.

Livability in Pasadena and Beyond

A great first step toward being able to implement more bicycle and pedestrian improvements citywide in a time when concepts such as protected bike lanes and pedestrian streets are being more seriously discussed.